You are gaslighting yourself.

I am a mathematician. Not professionally, but mentally. I'm one of those people who had an affinity with numbers and logic from a very early age, which led eventually to a degree in maths and a career in IT. I understand that a lot of what seems bleeding obvious to people like me is opaque to many people. (This is not to be boastful: we all have our strengths and weaknesses, and Lord knows there's plenty I don't understand, like football and small talk and not making people want to punch me.) But I honestly did not appreciate until this week the extent to which obvious mathematical truths are complete mysteries to such a huge chunk of humanity.

Of course I'm talking about the cursed election. You may have seen these graphs: 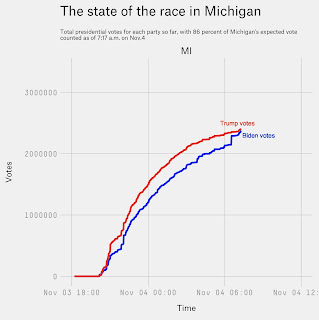 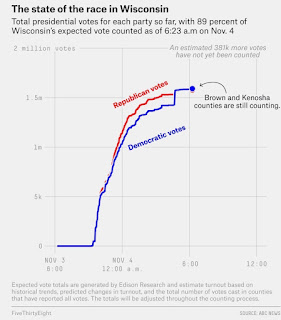 Those graphs are evidence of something highly suspicious happening. Clearly and obviously, to anyone who understands numbers. That has nothing to do with what they're measuring. If they were graphs comparing the performance of two brands of dishwasher, they'd be suspicious. If they were exchange rates or share prices, the financial regulator would be demanding an explanation from the banks involved, and actively considering raiding those banks if such explanation was not forthcoming. The idea that those numbers are not suspicious is just preposterous. I shan't bother explicating why; one thing I've discovered this week is that those who can't already see it will determinedly continue not to. But the evidence honestly couldn't be much clearer. And yet the dominant claim, repeated all week throughout the world's media, is that there is "no evidence". Not that the evidence is, on balance, unconvincing, or that it can be explained, but that there simply is none. That so many millions of people are apparently willing to believe such a thing is the most damning indictment I have ever seen of the state of maths teaching.

There are various scenarios that could explain graphs like that. "This is normal; nothing to see here" is not one of them — but that's the one we've been given, again and again, smugly and condescendingly, by people insisting that even being suspicious of numbers like that is a sign of knuckle-dragging stupidity.

But, utterly unsurprisingly, it turns out that the evidence was worth looking into. For instance, Antrim County, Michigan discovered that software had allocated 6000 votes to the wrong candidate. That's not a conspiracy theory; it's not a paranoid accusation by the losing party; it's a fact, verified and confirmed by the election officials. The numbers were evidence that something was wrong, so people investigated the numbers, and found that indeed something was wrong. That's how evidence is supposed to work. It may be that the software was hacked with the intent of fraud; it may also be a mere innocent error. But what it most certainly is not is nothing.

That software, incidentally, is in use in 47 counties. Since we now have proof that it malfunctioned to the tune of thousands of votes in one of those counties, that proof is in turn evidence that it may have done something similar in the other counties. That evidence should of course be investigated. It might turn out that it only miscounted in Antrim and worked correctly everywhere else. That's how evidence is supposed to work too. But claiming that it might have behaved the same way everywhere it was used (which is, after all, what such software is explicitly designed to do) is not crazy, is not sore losing, and is not an attempt at a fascist power-grab. It's an entirely reasonable suggestion. And refusing to investigate it would be insane.

I currently work in financial regulatory reporting. If I were to see numbers like that and not investigate them, I could go to prison. And I'd deserve it.

The graphs are far from the only evidence. Larry Correia set a load of it out here, along with a good explanation of what a red flag is in an audit and what it does and doesn't mean. I recommend reading it if you're interested in the US election.

But, believe it or not, I don't want to talk about the US election.

I've deliberately not mentioned Trump till now, because this isn't really about him — or shouldn't be. Trump will be gone in four years or a few weeks, and either one is the blink of an eye. (Note to teenagers: Yes it really is. Just wait.) Democracy, we should hope, will be with us somewhat longer.

Four years ago, in a context that was different yet ultimately the same, I wrote this:

But to think that that makes the theft of our rights and powers OK is to fall into the usual trap of thinking that democracy is just a decision-making mechanism, and that therefore it is the decision it reaches that matters. But democracy is not primarily a decision-making mechanism. I mean, really, if you were setting out to design a good way of making good decisions, would you come up with democracy? Of course not. Because it's laughably useless.

However, democracy is a very very good civil-war-prevention mechanism.

Democracy works because enough people believe that they will get their way some of the time. Because of that, they are willing to accept the result when they don't get their way — they know their time will come soon enough. It is this general belief spread throughout the populace that has effectively stopped people resorting to violence. This is why not only actual propriety but the appearance of propriety in the electoral process matters so much. This is why it is vital that suspicious events be investigated seriously. This is why investigating events and finding them to be above board is not the same as pre-emptively declaring that they are not worth investigating in the first place. The process matters far more than the result, because the process is the alternative to what our ancestors did. Our ancestors killed each other. In huge numbers. The best estimate of the effect of the English Civil War on Ireland is that about 41% of the population were killed. No, that's not a typo. Over disagreement about who should be in charge of another country.

American ideas have a way of spreading. For a long time, that hasn't happened with their electoral fraud. They have generally had a bigger corruption problem than the rest of the English-speaking world for some reason — just compare the number of entries for the US to those for the UK, Canada, Australia, and New Zealand on Wikipedia's list of controversial elections. That is about to change.

Because any tactic that works will be used.

Try and forget about your dislike of Trump for a second. Sure, you want him gone, for whatever reason. It ought to be possible to say so and yet still notice crap like this:

Just a general observation from a foreigner feeling ever more foreign since Wednesday morning: I have spent election night in many countries over the years, and have never seen what I saw on Tuesday night. And I am amazed that even the parochial brain-dead American legacy media could pass off what happened in Philadelphia as normal. Everywhere else the polls close and the riding or constituency counts the votes until they're all done and they have a final 100 per cent result - by 9pm, 11.30pm, 3am, however long it takes. But, in Philadelphia and elsewhere, they suddenly stop counting and everyone goes home until late the following morning to start counting the boxes that have shown up under cover of darkness.

And everybody on ABC, CBS, NBC pretends this is perfectly normal.

If that were to happen in a British election, we'd regard it as completely mental. I'd expect every candidate to protest — not on the grounds that they suspected their opponents of nefarious shenanigans, but for the more basic reason of seriously, what the utter fuck? This is just not how one does elections.

Because what happens when you insist that this is unremarkable, that there's nothing to see here, that this is a correct way of conducting affairs, is that you make it more likely. Half of America have their own reasons for insisting that it's AOK. You don't have to agree with them to prove your hatred of Trump. As long as the British were outsiders looking in, regarding such behaviour as a bizarre foreign American thing, it remained a bizarre foreign American thing. This week, when you declared you were fine with it, you invited it in.

Political parties are full of devious cheating bastards — because they are groups of human beings, so of course they are. Devious cheating bastards will do whatever they can get away with to win — you could look it up. Up till last week, there were things they thought they couldn't get away with in Britain. You are now busily telling them otherwise. You have told them that you're happy for polling centres to have their staff sent home and for tens of thousands of votes to be delivered while they're away. You have informed them that you will avert your eyes from obviously suspicious numbers. You have even told them that you will accuse anyone who does notice obviously suspicious numbers of corruption. The safeguard against this stuff was your refusal to stand for it. And you threw it away.

Any tactic that works will be used. Sooner or later, it will be used against you. Once these practices take hold, they'll be in our elections in twenty years, in fifty years; they'll be entrenched in the elections your grandchildren vote in. They won't even have heard of Trump, but they'll be stuck with this shit. Until they get fed up with it not working, so start killing instead.

Because half our generation eagerly lied to themselves because they disliked one politician, who wasn't even in this country.

Trump didn't do this. You did.

The original version of this article contained a third graph. It has since been removed from its original source, so I've removed it from here too.

Publish and be damned.